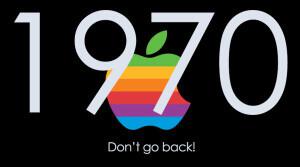 Beware iPhone lovers, you might be at risk! Why, you ask? Because some smart alec, perusing the internet with mischievous intentions, thought it would be a riot to outsmart the technically impaired populous of the world with a 1970’s iPhone break killing phones everywhere. HOPEFULLY you are reading this blog before having fallen victim of the date that killed your phone…

What people failed to understand was that in 1970 Apple didn’t exist, it wasn’t until 1976 that the company slowly took the world by storm. So, what happens when you travel through space time continuum with your new i6? Well you pretty much just killed your precious (and let’s not forget pricey) phone. Since it doesn’t register 1970 as a known date for software, it will not start. Ever. Again.

A day in which no matter what year, will be a very sad day indeed.

LUCKILY Apple, true to form, has a fix. Check out this article about a de-bugged update:

“Last week, it was discovered that setting your iOS device system date and time back to January 1st 1970 would crash your iPhone, iPad or iPod touch effectively bricking it. Setting the date back this far would prevent the iPhone or other iOS device from booting up until the battery died.

AppleCare has been flooded with people bringing in their devices after trying out this bug … Now, Apple has officially acknowledged the problem on its Apple Support website. The company says it will release an upcoming software update to prevent this issue from affecting iOS devices in the future.

Apple’s comment on the situation is short, but it claims that the bug can cause iPhone crashing with any date before May 1970.” — Benjamin Mayo, 9to5Mac

Experiencing other issues on your gadget or just wanted a professionals advise? Our online tech support professionals at My Computer Works are here to help you out, give us a call today.